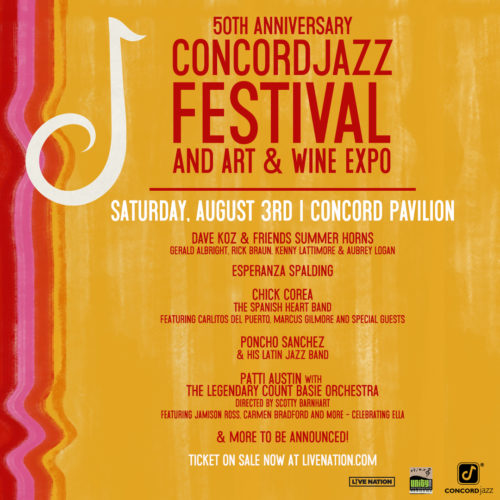 Join us for this great concert on August 3rd, tickets are now on sale.

Directed by veteran trumpeter Scotty Barnhart, the 18-piece Legendary Count Basie Orchestra includes a peerless array of instrumentalists with combined credentials that have topped the upper echelons of the international jazz world for decades. From Billie Holiday to Bing Crosby, Frank Sinatra to Nat King Cole, Sarah Vaughan to Ella Fitzgerald, the Legendary Count Basie Orchestra has provided the supremely distinctive sound and swing behind some of the greatest singers of the modern age. Coming off a Grammy Nomination for their 2018 album All About that Basie, the iconic big band will perform material from their newest recording Ella 100, a special tribute to Ella Fitzgerald, set for release on August 2nd, 2019 via Concord Jazz.

Performing with the Count Basie Orchestra will be Grammy Award-winning singer Patti Austin, Carmen Bradford, Jamison Ross and special guests. Austin has released more than two dozen albums during her career, and her record Avant Gershwin won the Grammy for Best Jazz Vocal Album in 2008. She is featured on several tracks on the Basie Orchestra’s upcoming Ella Fitzgerald tribute recording, scheduled for release this year on Concord Jazz. Jamison Ross is the winner of the 2012 Thelonious Monk Competition. The multi-talented drummer and vocalist’s debut album Jamison garnered a GRAMMY nomination for Best Jazz Vocal Album, and he was named Rising Star – Male Vocalist in the 2018 Downbeat Critics pole.

Join us for this great concert on August 3rd, tickets are now on sale.
An exclusive commemorative album of music by the featured artists will be included with every pair of tickets purchased for the 50th Anniversary Concord Jazz Festival. Instructions on redemption will be emailed to purchasers prior to show date. US/CAN purchasers only. One CD per pair of tickets. Not valid for Fan to Fan Resale.

The 50th Anniversary Concord Jazz Festival is presented in part by the Unity Music Foundation. More information at www.facebook.com/unitymusicfoundation